On a warm and dry summer’s day

Fourteen men went out to play

Hopes were high, clubs were ready

Who will succeed, who will be steady

The course this time was Rutland Water

Some will play well, some will falter

The tees were mown, the fairways green

Now off they start, eager and keen

The balls were struck from tee to green

Some were direct, some never seen

Who would play well, who would have luck

But which Delany would come out the best

The gorse seemed to hamper the man from Kent

As it swallowed his ball wherever he went

Some birdied, some parred, but no hole in one

Some cheered, some cried, some wanted their mum

But this is a course that is always a test

And only occasionally brings out the best

As the Clubhouse was reached, all wanted to see

Who Jon would pronounce was the ‘Top Follie’

The man with no shirt, the winner was Phil

With 35 points, he’s not over the hill

Colin H was second and Brian B made third

The rest of the group, their scores remained blurred

And after a round that was really quite grim

Yours truly’s only good shot won ‘nearest the pin’

So onwards The Follies to play in September

Rutland County’s the place for all to remember

The ups and downs that golf always brings

Means the pleasure we get is just one of those things!

No golf course on the slopes of Mount Etna in Sicily!! 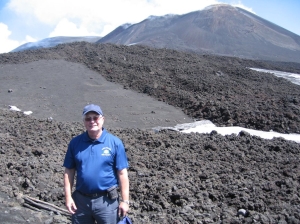 No golf course on the slopes of Mount Etna in Sicily!!

A lucky 13 Follies players made the short journey to Ramsey (yes, I know, it depends on where you’re starting from!) and enjoyed a very nice afternoon’s golf.

The day began with the news that Trevor Chapman had dropped out as he’d broken two fingers the night before.  What had he been up to?  Regardless, we hope to see him back soon.

Three 3-balls and a 4-ball set off and we kept pretty close all the way around. Indeed at mid-stage all four groups were across two holes.

David Carter was electrifying on the 10th where his first approach shot to the green hit the overhead power cable. He reloaded and hit the same cable again.

Richard Cheng, Jon and Roy and, I’m sure several others, struggled on the dog leg 8th.  Having seemingly lost two balls off the tee, Richard miraculously found a Titleist ball on the fairway that he thought must have been his second shot and played it. In fairness, with a good following wind and several favourable richochets, the ball could have been his.  Unfortunately it later transpired that Richard had played Andrew’s ball. It didn’t go down well.

Results:
A good set of results on a course where if the conditions are good then it can yield some good scores.

3rd was Robin on 39 who lost on countback

Winner was Colin Humphries on a more impressive 42

Our thanks to Graham for buying the beers in the clubhouse to mark his return to the Follies fold.

See you next time on Friday 21st August at Rutland Water.