Texas Scramble and 2019 Winner of the Follies Trophy!

Texas Scramble and 2019 Winner of the Follies Trophy! 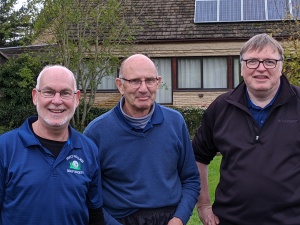 All Follies give thanks to Graeme Phipps who realised that we were lacking a Masters’ style Green Jacket to pass from last year’s Champion to the new Champion and so produced the Fritz Follies Pants! 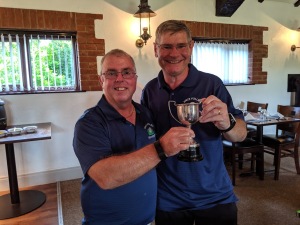 ** 2019 Shirtie winner is Les Wells for spreading the Follies gospel up the Nile. 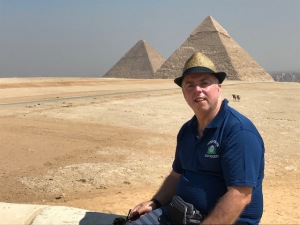 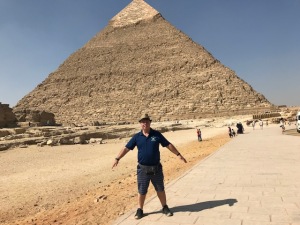 A good evening was had by all, I think and we now retire to hone our skills over the winter and to be ready for it starting all over again in March 2020.

See you all then……Happy New Year.

14 members scored 30 or more points but the cream was:

No less than 19 Follies assembled at Rutland County to do battle in the final round of the 2019 Championship.  No less than 22 players have played 3 or more rounds this year giving us our most competitive league for many years.  No less than 10 players harboured hopes of that “one round where everything goes right” to secure the Champion Golfer 2019.  How did we all fare?

Answers at the Fritz Follies Golf Society Annual Supper and Prize Giving 2019 on Friday November 1st at The Cuckoo, Alwalton!

And firstly a picture of the last group on the 18th green:

followed by the group hanging on Les’ every word 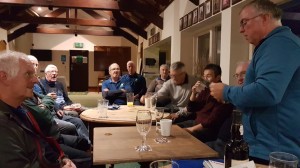 The penultimate round of this season’s Follies Championship saw 11 hopefuls appear in deepest, darkest Cambridgeshire on another lovely warm summer afternoon that Les is so skilled at choosing. Sadly, Les was unable to play today having injured his arm/elbow carrying the luggage on his recent trip abroad (presumably his usual man-servant didn’t turn up).

Roy nearly missed his bacon bap as he arrived very late having covered most of Cambridgeshire and was finally put on track by a farmer and his wife who advised he had about 10 miles to go – he’d already done about 30 by this stage!

With half the field still in contention for the Championship, a hushed, expectant silence descended over the group as the first 3-ball teed off. On a tight course with plenty of water, scores were very respectable though no-one managed to stay on the 5th green to capture the Nearest the Pin prize. Several were heard to lament about being six inches off the green – but the bottle goes back to the Follies Wine Cave.

Trevor lost 2 balls on the first hole, I think both from the tee, but things did improve.

In Les’ absence, Geoff D kindly stepped in as master of ceremonies and announced:

Report not by Richard Cheng – ask him!

Latest entry is a 3-in-one from DC – the full set of Follies shirts! 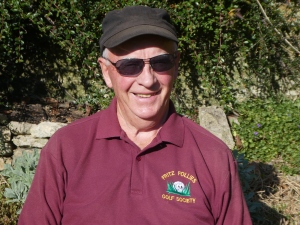 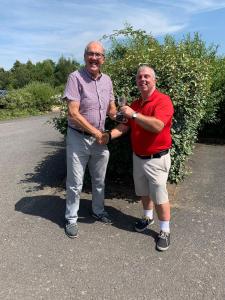 According to the Carol on the BBC Weather the hottest days for the last 3 months have fallen at the end of each month. We can testify to that fact after Tydd last month and then similar temperatures at Greetham. Trevor Chapman providing additional water for everyone at Tydd was a fantastic gesture and it was a shame he did not play today as many of us wilted in the heat and the hilly terrain. Only 3 players beat their front nine points total, Les with 2 points and David W with 7 points suffering more than some.

It’s always nice to wrap up a prize early in the season. Andrew Bramwell hitting a magnificent 11 out of the Bunker to secure top spot for Bunker Flunker, perhaps it can still be challenged?

Nearest the Pin was on hole 18, David Carter firing the first attempt to within 15 feet then finishing the Putt with a fist pump as well. Man of the moment Richard Cheng stepped up in the last group to arrow a shot to within 8 feet to take the bottle prize, but missed the subsequent birdie putt. That putt did not matter to the final result as Richard won the day with 35 points and now leads the Fritz Follies Trophy with just 2 outings to go. Could it be his year although many could still make a challenge. Steve Preston was 2nd on  32 points ahead of David Oliver on count back by virtue of four points on the 18th.

On we go to the next outing at Lakeside Lodge on Friday 20th September, can the heatwave last……

Some of us don’t go as far as Tydd St Giles on our holidays but, it was generally agreed on this occasion, that the trip was well justified. Beginning with a very nice ‘small’ full english, followed by a very well maintained course with manicured fairways and lightening fast greens all finished off with a Steak and Kidney pie and chips. A great day out!

We lost a couple of members due to the expected heat (David Carter advised he was “too hot to handle”) – in fact,buggies had been requested but some rascal in the Fens had stolen all the club’s batteries so it was just the 11 of us who gathered for the fifth outing of the 2019 campaign.

Jon Kelly had to contend with a collapsing trolley for the first few holes. In fairness to Sports Direct, they had sold it as a golf trolley but he was using it as a mobile water reservoir. Once he’d drunk about three pints and rebalanced, all was well.

Graham Wilson was also struggling, never more so than on the par 3 140 yard 4th where his tee shot hit a ladies teeblock and flew back past him leaving him 155 yards to go with his second shot.

A long standing Follies record is held by the late Pete ‘Lou’ Dowdell who recorded a score of 6 points at Luffenham Heath many years ago. It was threatened by two players today – Graham W was on 6 points after the front nine but recovered, and Trevor was on 5 points with 4 holes to play but squeezed out another 2 points to get to a total of 7!

I’m not sure of the Follies record score for Bunker Flunker nor this year’s contenders but Geoff D gave up after 4 attempts so not sure how the BF committee will handle that!

Results:  (nb we don’t dish out any old ball these days but Fritz Follies Golf Society inscribed ones)

Nearest the Pin: Dave Ballard. Geoff D was nearer the pin but off the green. To his credit he did make the birdie.

16 keen golfers competed at Elton and Chris Munro came to see us off. 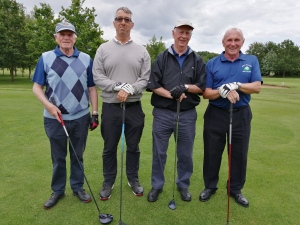 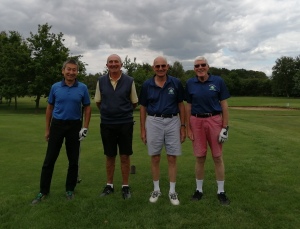 Richard Cheng unusually arrived in good time but complained as he waited to start that he could have spent another half hour at his office.

Les had once again arranged for ideal weather for golf with warm broken sunshine and little wind. The course was in an excellent condition following the recent rains.

Brian Bates thought he was bunker flunker of the day when he took 4 shots to get out of the sand on the 6th but Roy Fletcher bettered this with 6 shots on the 11th finally landing the ball next to the flag for an easy putt.

Chris Munro had kindly donated a fine bottle for the longest drive and this was won on the 18th with an excellent tee shot by Andrew Bramwell.

Nearest the pin was won by Martin Zebedee and after receiving his prize he presented Geoff Delany with a miniature bottle because he had been so upset at the last meeting when he thought he was nearest the pin but was on the wrong hole.

Dave Ballard, on only his second outing with us, covered himself in glory winning the President’s Cup with a net 66.8 score and 40 points in the monthly competition. As only one prize can go to a player Colin Keal was awarded First Prize with 35 points, Richard Cheng was second with 32 points and Graeme Wilson, on his Follies debut,  was third with 30 points.

The next meeting will be at Tydd St Giles on Wednesday 24th July.

Words and photos by CH (Ed: a jolly good job too!)

Well Folliites can you guess where we went? Here are a few clues – the sky was sunny with a dark cloud looming, the tees were not cut, the fairway and greens were slow – however this year unlike last you could find your ball on the “fairway”. Need any more clues – well last year it flooded three days before we arrived they did not tell us, but still charged us full price. Yes, you got it we were at Ramsey Golf club in Huntingdonshire – not as had been previously booked many years ago Ramsey on the Isle of Wight!! Although given that story I think it could have been a deliberate “Lawyer’s trick, in the hope of coming first whilst everyone else went to a different course.  Hey, that’s seems familiar Trevor – but at least you did make it to the game (score was rubbish though). I doubt, like at least one other Folliitie, if the writer will bother with Ramsey again.

Talking of Trevor he started off with 9 points from the first three holes going on to 17 points after nine holes with two blobs. The second half he doubled his back nine score with 2 points on the 17th. Not so much piston-broke, but the back axle came off as well.

Dave Ballard is making a break for Bunker Flunker with 5 shots, whilst poor John Wakefield had his ball stolen on the 14th after a magnificent drive. One of the children did eventually return it, but to another member of the group as they accused him of being a “miserable git” – Welcome to Ramsey again.

Colin Keal has a new nickname “the second coming”, as if his second Tee shot was his first he would have had a great score. Graeme Phipps suffered three holes with double vision but nobly carried on – unfortunately for him he was not allowed two scores for those three holes. Fortunately, he did make a good recovery.

However, the shot of the day came from Andrew Bramwell who shall now be known as “Bouncing Bridge Bramwell” for landing his tee shot on the 18th on the flat walking surface of the bridge bouncing into a very good position for the green. Unfortunately, due to the slowness of the greens his ball finished within half an inch of dropping (his fourth such putt to do this) so his missed the par, which cost him first place.

Making a rare appearance in the winner’s circle with 36 points was Martin Zebedee, with Graeme Phipps beating Andrew Bramwell to runner up on countback on the last six holes – both with 35 points. So very well done Martin. Can he make it a double appearance when we visit Elton Furze on the 21st June? Stay tuned for the next thrilling instalment.

The Shirtie is up and running

Remember to take your shirt with you on your travels!   If you don’t have a shirt, Les can fix it for you.

Early contenders are Les up the Nile without a paddle:

and Kevin in The Happiest Place On Earth: