Some of us don’t go as far as Tydd St Giles on our holidays but, it was generally agreed on this occasion, that the trip was well justified. Beginning with a very nice ‘small’ full english, followed by a very well maintained course with manicured fairways and lightening fast greens all finished off with a Steak and Kidney pie and chips. A great day out!

We lost a couple of members due to the expected heat (David Carter advised he was “too hot to handle”) – in fact,buggies had been requested but some rascal in the Fens had stolen all the club’s batteries so it was just the 11 of us who gathered for the fifth outing of the 2019 campaign. 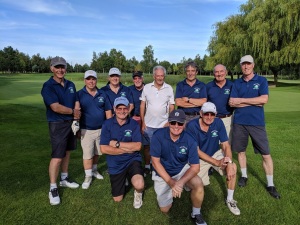 Jon Kelly had to contend with a collapsing trolley for the first few holes. In fairness to Sports Direct, they had sold it as a golf trolley but he was using it as a mobile water reservoir. Once he’d drunk about three pints and rebalanced, all was well.

Graham Wilson was also struggling, never more so than on the par 3 140 yard 4th where his tee shot hit a ladies teeblock and flew back past him leaving him 155 yards to go with his second shot.

A long standing Follies record is held by the late Pete ‘Lou’ Dowdell who recorded a score of 6 points at Luffenham Heath many years ago. It was threatened by two players today – Graham W was on 6 points after the front nine but recovered, and Trevor was on 5 points with 4 holes to play but squeezed out another 2 points to get to a total of 7!

I’m not sure of the Follies record score for Bunker Flunker nor this year’s contenders but Geoff D gave up after 4 attempts so not sure how the BF committee will handle that!

Results:  (nb we don’t dish out any old ball these days but Fritz Follies Golf Society inscribed ones)

Nearest the Pin: Dave Ballard. Geoff D was nearer the pin but off the green. To his credit he did make the birdie.