A belated start to the Follies season saw a very respectable turnout of 17 for a return to a venue we had not visited in a long time.  This was my first visit but always understood that it was a hilly course with some blind holes.  Like all Follies, I was up for a challenge – it was also the hottest day so far of 2020… Throw in the sight of Follies in face masks as they emerged from the Pro Shop and it was not the usual Fritz Follies Monthly Meet.

Toft has had many problems this year. The Club was in administration and taken back to their original ownership but not before they had been stripped of all assets, equipment and cash. So, it is remarkable that Toft has been able to get the course into such good conditions with the pandemic to deal with as well. Mark Jackson, the Professional, has been excellent all the way through with our booking.

Les, Colin S. and Geoff were grouped together as the first group out. By the time they had reached the summit of hole 1, Colin was already showing signs that he would not be able to endure the conditions for very long. Plan B was put into action as Colin joined Geoff in the buggy halfway down hole 2. The joy ride was short lived as on hole 4 the buggy also decided the heat was too much and decided to stop working. We then proceeded over the next couple of holes in a stop/start fashion. On hole 6 Colin changed over to David Oliver’s buggy who then went down to the Pro Shop where Colin collected another buggy. During this time with Les pushing Geoff in the buggy and some perseverance from Geoff the faulty buggy started to which Geoff then drove back to the clubhouse leaving Colin’s bag outside the shop. Les was sitting on the 7th tee when Colin returned with his own buggy, it was like a farce but Geoff then returned to continue the round. By the time we reached the 9th Colin had to give in to the extreme conditions of the day.

Everyone was struggling not least Gabe who deposited his breakfast and lunch on the 9th tee. We had several retirements at the 9th. It is amusing, in hindsight, that our small Society ended up being spread around the course not in the order we started and for some in the wrong place! The first group was joined by David Carter on the 18th tee but he was expecting to play the 16th!

Arriving back at the Clubhouse was akin to returning to the safety of the rear line in a war zone watching the occasional casualty limping back having lost his comrades in the conflict.

Amongst the carnage some results emerged:

Nearest the Pin – Trevor Chapman.  It was so good I took a photo: 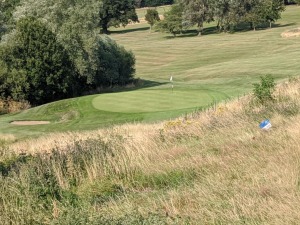 1st – Colin Humphries on 30 on countback

There was no presentation ceremony and may not be for some time but, I’m sure, Les will find a way for the prizes to find their way to their respective homes.

Next outing is Lakeside Lodge on Wednesday 26th August and Les has confirmed it will not be hilly or have temperatures of 37 degrees.

Posted on August 8, 2020, in Uncategorized. Bookmark the permalink. Leave a comment.